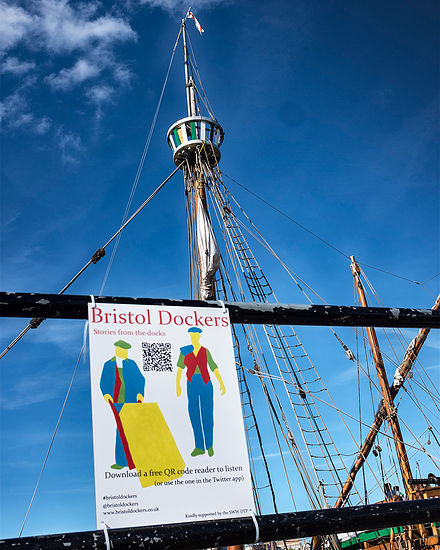 In November 1974, the last trading ship sailed out of the Bristol City Docks. For many men, this marked the end of the only working life they had known; some found work in Avonmouth, while others changed jobs completely.

In its heyday, ships came into the City Docks from all over the world, bringing with them cargo and crew from Europe and beyond. There was cork from Portugal, oranges from Spain, and wood from Scandinavia (not to mention the Guinness that came from Dublin or the wine from Southern Europe).

You could walk around and you’d hear these seamen talking Spanish, or Italian, or other languages, and they would throw you oranges. Course I’m talking just after the war, rationing was still in place and it was seeing the world come to you really.

Today, though, the space of the former City Docks is mainly one of leisure – a place of calm in the heart of the city. With the exception of the four majestic cranes that stand over the water as memorials to a lost industry, little remains of the lives and livelihood of Bristol’s dockers.

Thanks to funding from the SWWDTP, I was able to spend several months listening to archived interviews with Bristol dockers and doing some more of my own with the aim of bringing the original dockers’ voices back into the spaces of the former City Docks.

I learned that dockers from Bedminster Down wore red neckerchiefs, while those from Parson Street wore green. I also heard about the international visitors to the city docks, the cargo they brought and the songs they sang. I then worked with a sound engineer to build themed tracks, covering topics including the struggle to get a day’s work, the social life at the Dockers’ Club and the pilfering of Guinness.

After making the soundscape, I was lucky enough to work with the Bristol Ferry Company to put together a shadow puppet show for Docks Heritage Weekend in 2018. Kim Fielding – outreach co-ordinator for the ferry company – worked with Adri Piqueras, an Aardman animator, to create the brilliant shadow puppets you can see in the video below. The soundscape was created by Suitcase Sound, a local sound artist.

This year, I’ll be working with ACH Smith – the playwright behind Up The Feeder, Down the Mouth – to put on a short performance piece using the dockers’ stories he collected in the 1990s and some of my more recent interviews. The show will be performed at M Shed over Docks Heritage Weekend.