A NIght in the Life of a Dubstep DJ: An Unexpected Ethnography (Part 1) 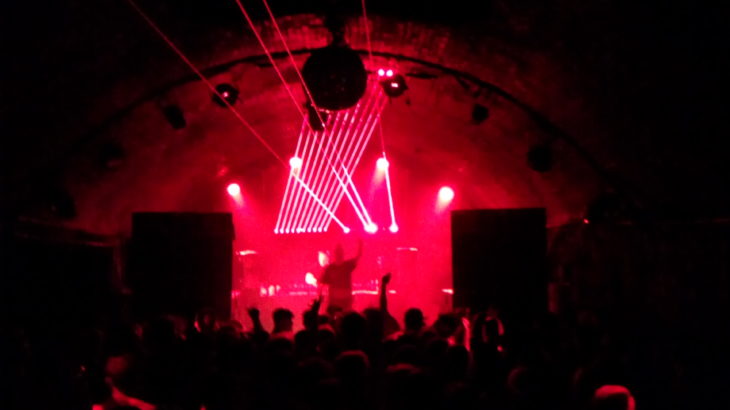 During the first couple of weeks of August I spent some time with my non-HEI partner, Artikal Music UK, in Belfast. Artikal is an independent record label dealing primarily with dubstep music (the genre I am researching for my SWWDTP funded PhD project). The organisation behind Artikal also operates subsidiary labels — Lion Charge, Dubplate Championz and Prestige Cuts — catering for dub, jungle / drum & bass and UK garage respectively. This is relevant for reasons I will come to in the second installment of this post.

My host for the week, co-founder and manager of Artikal Music UK, is a highly respected DJ and record producer in his own right, best known for his dubstep work under the name J:Kenzo. Covid times notwithstanding, his lifestyle as a professional musician can be demanding and often unpredictable. Consequently, just after we had firmed up the arrangements for my Belfast trip, he took a booking. Scheduled for the midway point of my visit. In Bristol. This is ironically — laughably — where I’m based. 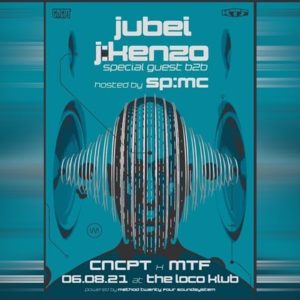 While these last minute rearrangements were a bit inconvenient, this nevertheless presented an excellent opportunity for ethnographic study: a night following a dubstep DJ in his “natural habitat”. My host kindly made travel arrangements for me alongside his own, and I jotted the event into my itinerary for the trip. I’d like to relay the events of the night in this post, and hopefully give some insight into how this experience was beneficial to my research project, as well as a glimpse of the demands that can be placed on those involved with the dubstep scene, even though, as an “underground” subculture, this working life is very much towards the periphery of the professional music industry.

The night began with a message at about 4.30pm: “Sorry, I’m running late. Are you ready to go?”. This was a bit close to the wire, as our flight was at 6pm and we were a good thirty minutes drive from Belfast International airport. The atmosphere during the ride was a bit tense, and this ramped up further when we hit an enormous queue for security. By the time we made it through, our gate was already on final call. We then hit another queue of slightly bewildered looking people waiting to board, seeming that there might have been a problem with the flight. With this being my host’s first show playing in front of an unrestricted, full-capacity crowd since Covid first hit the industry some eighteen months earlier, this wasn’t exactly the start to the night he’d hoped for.

Fortunately, we were eventually allowed to board the plane with what felt like seconds to spare. Once we started to taxi, the tension eased. I fired up my portable recorder and for the duration of the journey my host and I chatted about his experiences of travelling to shows and touring internationally over the course of his ten-year-plus success with this music scene. 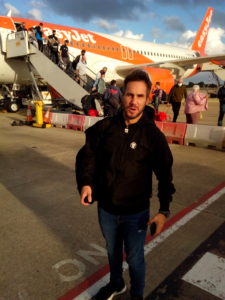 The main man departing the flight at Bristol.

After landing in Bristol, we took an Uber to a functional, if sub-par, AirBnB in St Pauls and then ventured out for some food. This is, by all accounts, the standard procedure for DJs when flying to play shows: arrive in the destination city, check in and go get something to eat. Sadly we weren’t joined by the promoter or any other artists, which apparently is very often the case. After eating (Cafe Cuba on Stokes Croft), we briefly returned to the AirBnB so my host could get organised, and then took another Uber to the venue, arriving about an hour before he was scheduled to perform.

The first thing that struck me at the venue was the intensity of sound thundering down the brick tunnel from the main arena. In my mind this represented both a literal and figurative gateway to a sonic experience fundamental to this musical culture. Dubstep is heavily indebted to a set of traditions standing on the foundations of sound reinforcement technology. I’m a seasoned participant in this kind of music world, so heavy bass is something I am fairly acclimated to, but by any measure the sound this night was intense, the result of squeezing a lot of sound system into an acoustically sympathetic space. I shoved my earplugs in as quickly as I could, and we followed a member of staff into a small, spartan and slightly smoky green room. 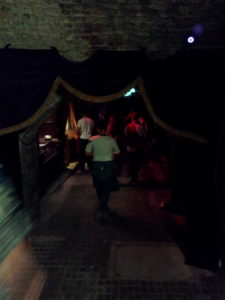 My host was clearly on familiar terms with the promoters lounging in the green room, and they were very hospitable, offering around spirits and soft drinks. Other artists soon began to arrive and there was a palpable sense of comradeship. Fist bumps and manly hugs were exchanged all around, with some artists clearly reuniting in person for the first time since Covid struck. I was personally pleased to see some familiar faces too, people who I’ve met either through dubstep circles or through the Bristol music scene. I’ll admit here that I’d been a little bit dismayed at the prospect of flying back to Bristol, of all places, for the gig (“don’t even get a night out in Berlin” was a phrase I’d thrown about a few times earlier that week) but after chatting with some “heads” in the green room, the serendipity of the situation became apparent. It was great to have the opportunity to exchange friendly chat and phone numbers with local artists who are all keen to participate in my project in the near future.

Fifteen minutes or so before showtime we made our way backstage. There were several artists and members of the events team congregating, either in conversation (made weirdly intimate by the almost claustrophobic intensity of sound) or just appreciating the music. The bass back here was so powerful that I could actually feel my lips vibrating, pretty violently ! This was hardly surprising given the size of the speaker stacks towering above us — and we were ourselves elevated on staging a metre or so above the floor on which the stacks were mounted. 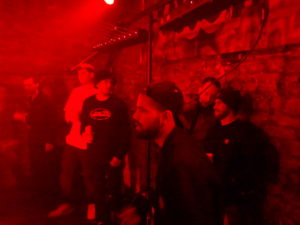 Backstage space. J:Kenzo can be seen on the right in conversation with SP:MC, shortly before they take to the stage together.

I need to give some attention to the speaker stacks here, as these are part of what I call the “visual front end” of this musical tradition. Dubstep music gestated in an environment stripped back to the bare bones in terms of decor. The twin pillars of the early dubstep movement, the club nights FWD>> and DMZ, were essentially nothing more than dark rooms with towering sound systems. The experience was all about the music and the sound, harking back in many ways to the minimal aesthetic of blues parties and Jamaican dancehalls, which are hugely important aspects of dubstep’s genealogy. This event captured the traditional atmosphere admirably, with the unassuming brick arena bathed in simple red monochrome, as can be seen in the accompanying images. 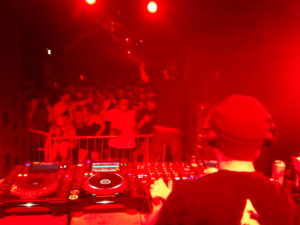 J:Kenzo takes to the decks, with SP:MC “hyping” the crowd.

My host took to the decks at midnight, accompanied by compadre, SP:MC. The role of the MC in this environment is to enhance the DJ’s performance by “hyping” the crowd and articulating, in a deliberately dramatic manner, what’s exciting about the music. There are also occasional “bars” or “flows”, in which the MC briefly raps in time with the beat. Along with the towering soundsystem, this pairing of DJ and MC is a central part of the musical heritage to which dubstep is a successor. While what the MC does is only occasionally teleologically meaningful, the figure of the MC is nonetheless utterly indispensable in this environment. What I consider to be the complete “visual front end” of dubstep is a holy trinity of sorts: DJ, MC and sound system. 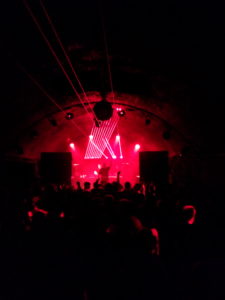 Here you can see what I consider to be the tripartite “visual front end” of dubstep: towering speaker stacks (left and right), MC (centre) and, most importantly, DJ (head and forearm just visible under the lights, rear and slightly stage-left of the MC).

With dubstep’s holy trinity up and running — decks spinning, MC chatting and speaker stacks thundering — midnight seems an appropriate place to press pause, so that’s all for now. In the second part of this post I will look at Jay’s performance itself and discuss the significance of this to my research project. I’ll also relay the second part of the night, giving an insight into just how demanding and exhausting an occupation this can be for those working professionally within this musical subculture.