A Weekend with the King: The Porthcawl Elvis Festival 2021 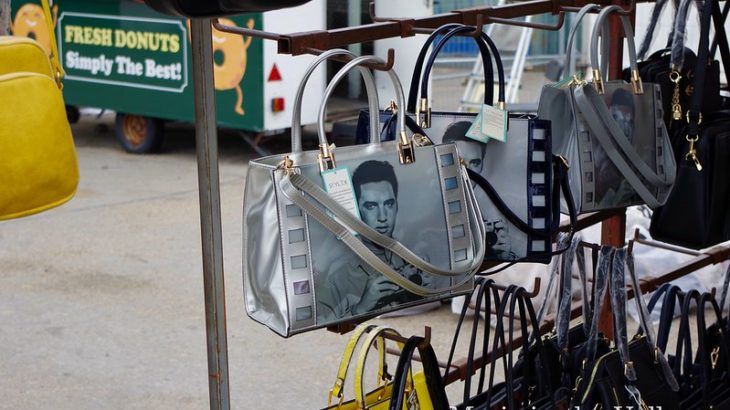 Nyle Bevan-Clark, University of Southampton (Music) and University of Bristol (Sociology), talks about his ethnographic research at Porthcawl Elvis Festival.

My PhD project explores the social life of music in post-industrial, working-class communities in South Wales. My research focuses on often overlooked and marginalised musical experiences—from Elvis impersonators down the club to karaoke singalongs and amateur music societies—and asks what these experiences can tell us about ideas of community, cultural identity, and collective memory. In September 2021, I conducted ethnographic research at the Porthcawl Elvis Festival as part of this wider project. Despite the festival’s worldwide appeal, it is often described as a ‘particularly Welsh event’ and one that is very well supported by the people of the South Wales Valleys. I took the opportunity to chat to as many fans, festivalgoers, locals, and Elvis Tribute Artists as I could and ask: ‘Why Elvis?’ and ‘Why Wales?’.

The coastal town of Porthcawl in Bridgend, South Wales, might seem an unlikely place for the largest Elvis-themed festival in the world. You might expect Memphis to hold this title, or perhaps even Nashville, but it is this Welsh seaside resort which has hosted tens of thousands of Elvis fans, Elvis Tribute Artists (ETAs), and festivalgoers from around the world every year since 2004. For one weekend in September, Porthcawl is transformed into a riot of all things Elvis, America, and rock ‘n’ roll. Many of the town’s venues get behind it, and you can expect to see an ETA in almost every single one (yes, even the chippies!). Shops hang up bunting and flags, bakeries and cafés make Elvis-themed treats, and even the taxi drivers are not afraid of donning a quiff and a pair of gold sunglasses. The festival’s two main venues, the Grand Pavilion, a 1920s music hall where most of the ticketed events for top ETAs are held, and the Hi-Tide, a seafront club with over five performance spaces, stand at either end of the promenade, about a mile apart. Throughout the town you can expect pubs, clubs, bars, and hotels (the Brentwood Hotel renames itself the Heartbreak Hotel for the weekend) to all put on an extra show with round-the-clock music. Everywhere you go there is fancy dress, immaculate costumes, t-shirts and memorabilia, iconic hairstyles, and even, if you’re lucky, a few Cadillacs rolling around. 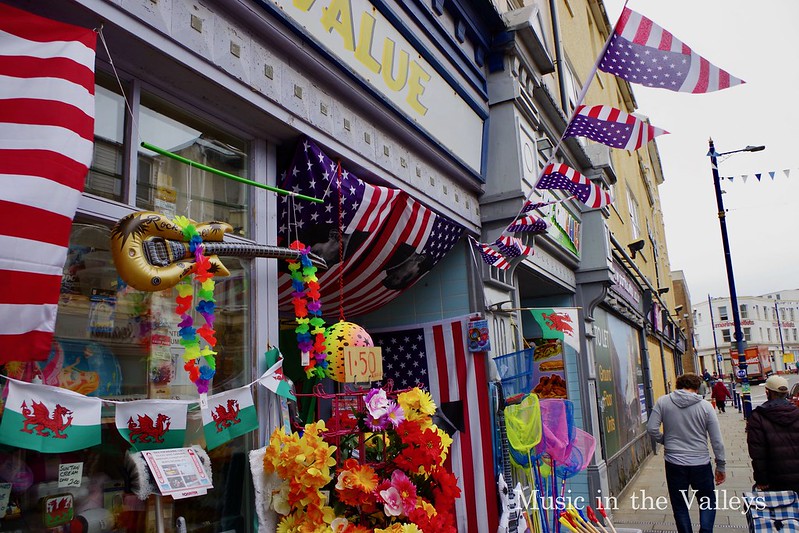 The day before the festival really kicks off, the vibe at the seafront is subdued and subtle—a quiff here, a leather jacket there—and I begin to feel self-conscious in my Elvis ’68 Comeback t-shirt and lei. But sure enough, as I wander out onto the high street, I am met with a riot of all things Elvis: there are garlands, leis, stars and stripes, the Welsh dragon and, of course, Elvis’ face gazing out—timeless, and unchanged. A bejewelled mannequin in a facemask stands in the pharmacy window, a not-so-subtle reminder of the ongoing pandemic which has led to this year’s very different festival.

At Coney Beach, near the fun fair, there are market stalls selling Elvis memorabilia—holographic bags, spotty petticoats, mugs, magnets, flags—peppered with the usual Welsh knick-knacks. As I reach the end of the stalls, a woman at a coffee kiosk, seeing my camera and pre-empting my hope of photographing some Elvii (yes, that is the plural for more than one Elvis!), shouts out: ‘You’re too early. They’re all still in bed!’ After a quick pitstop, sure enough I start to see some Elvii emerging. The route from Trecco Bay to Hi-Tide gets busier, and I speak to Dai, dressed in a Vegas jumpsuit who owns a burger van called Lisa Marie, and two ladies in Elvis frocks from Scunthorpe who show me a few line-dancing moves.

As the day goes on, coaches start arriving, many of them bringing visitors from Merthyr, Rhondda, and Pontypridd, and I begin to think of the stories my grandparents have told me about the 1950s and 60s, when industrial workers would come to Porthcawl to escape the coal dust of the Valleys. Porthcawl is very much part of the cultural consciousness of working-class South Wales. Alongside other seaside resorts such as Barry Island, Porthcawl was jampacked every summer when miners took their two-week holiday. In its heyday, it was difficult to put a pin between the crowds on the beach, and children relied on the big numbers painted on the promenade to find their way back to their families after a paddle in the sea. 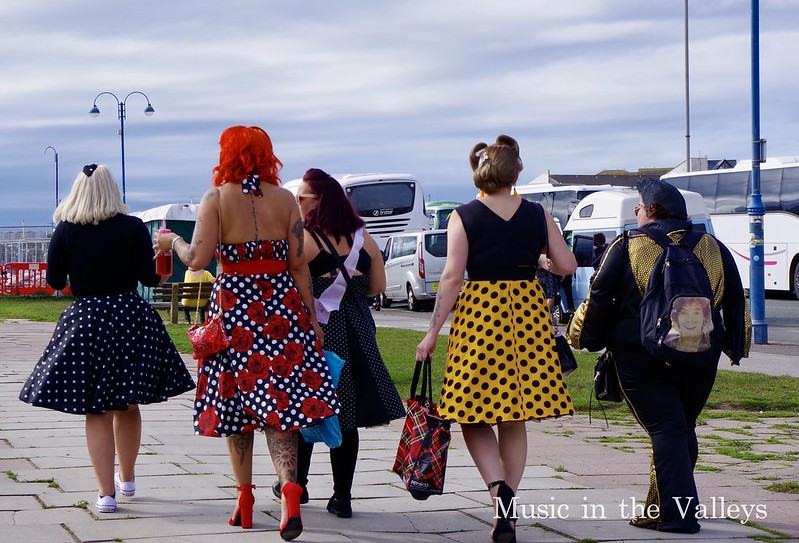 Friends, workmates, neighbours, and very often whole streets went together, sharing cars and caravans. It was almost impossible to see someone you didn’t know, and it was often called ‘Hiya Butt Bay’ for this very reason. (‘Butt’ or ‘butty’ is Welsh slang for mate.)  Seventy-odd years later and the Elvis Festival doesn’t feel that different. Trecco Bay Caravan Park is still full of families, friends, and neighbours catching up, and, like the miners’ fortnight, the festival is blocked out on the calendar a year in advance.

As the weekend progresses, I’m struck by what a fun, good-natured, and downright crazy festival this really is; a sentiment I heard repeated many times over the course of the weekend was that it shouldn’t work but it does. It’s accessible and relatively inexpensive; with most venues providing free entry shows, festivalgoers don’t have to spend hundreds to have a good time. Many suggested that anything goes at this festival. As one respondent told me, ‘You can look how you want, dress how you want, sing how you want, and not be judged for it.’ (Well, unless you’re being judged as a competing ETA that is!). Even with the pitchiest ETA, there seems to be a very Welsh mentality of ‘fair play, they’re giving it a go.’ The festival draws in all ages, and there is a real sense of the intergenerational appeal of Elvis. Everyone seems to have a story: love him or hate him, Elvis is there in the background. 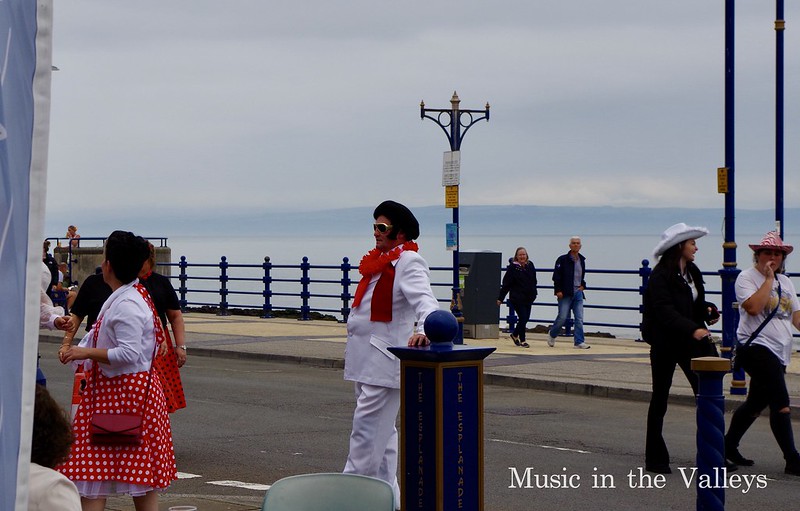 When chatting with other festivalgoers, my first question was often ‘Are you a big Elvis fan?’, and the reply that usually came back was ‘no, not a huge one, no.’ So what, then, is Elvis’ appeal? The many conversations I had alluded to the timelessness of Elvis. As one man observing the festivities from the comfort of a coffee-shop balcony said, ‘He’s always there. His face never changes.’ Whilst some may be tempted to say that the festival plays on a rose-tinted nostalgia, I got the sense that it is more than that. Rather than remembering Elvis, the festival acknowledges his constant presence: Elvis is there, steadfast, no matter what life throws at you. As one respondent said to me, ‘You know you are going to get good songs; you know you’re going to know the words; and you know you are going to have a good time.’

In a conversation after the festival, its organiser Peter Philips was keen to remind me that there isn’t a greater concentration of Elvis fans in South Wales compared to anywhere else in the world. Rather, it works because of its cultural context. For Philips, the festival is light-hearted, friendly, and doesn’t take itself too seriously. It’s not some reverential, spiritual deference to the King, as takes place in Memphis or Nashville, but rather a way for people to celebrate a music that they love, and a music that has played a soundtrack to their lives. Even non-Elvis fans will be humming the tunes by the end of the weekend. As one backing singer told me, ‘I’m like a child when I know it’s coming. We’ve been all over and there’s nowhere as friendly, as fun, as supportive as Porthcawl. We come every year; we just love it!’. In pandemic times, this sentiment resonates more than ever; it was one of the friendliest experiences I’ve ever had. For many it’s about being an Elvis fan. But for others, all those who said, ‘not really, no’, it’s about having a good time with people who are all connected with one thing in common: the King.

The ethnographic data collected from this festival will form an integral part of my research exploring the social life of music in South Wales communities. The themes that emerged from the weekend’s ethnography are multifarious. In particular, many of the emergent themes go against stereotypical narratives that situate experiences such as the Elvis Festival as nostalgic or ‘stuck in the past’, to ones that are very much in the here and now. Whilst in its initial stages of analysis, outcomes from this experience will form a key part of representing the varied and diverse musical landscape of the South Wales Valleys: bringing to light marginalised experiences, forgotten histories, and overlooked voices. I am very grateful to the South, West and Wales Doctoral Training Partnership for funding research at the weekend’s events through the Research Training and Support Grant, and for their support of this PhD project. My thanks to all those who took the time to speak to me over the weekend or to pose for photographs.

To find out more about this research project or to get in touch to share your experiences, find Music in the Valleys on Facebook or Twitter, or send me an email at N.Bevan-Clark@soton.ac.uk.