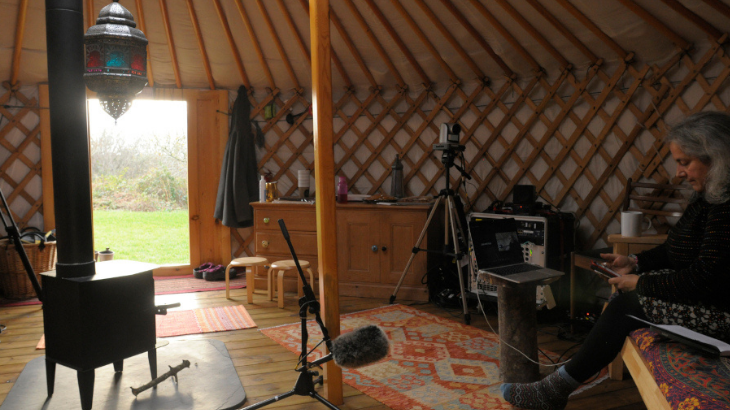 “No two were alike, being artistically patterned with different colours. In short: nature has produced a masterpiece”

Recently I was very lucky to be awarded a subsidised experimental practice residency at Trevellan, near Constantine in Cornwall. I’d applied for this residency to develop some technical skills for a piece of creative-work for my practice-based PhD exploring new modes of telling extinction stories in public contexts. This post offers a brief account of my residency, and some reflections on its outcomes.

Whilst reading Thom van Dooren’s book Flight Ways (2014) in the early stages of my research, I was moved by his reinterpretations of avian philopatry (fidelity to a specific breeding ground) as an other-than-human ‘storying-of-place’. Thinking around this, I began to hypothesize it for the subject of my own PhD—the great auk. The auk once nested in huge social colonies on a small number of isolated North Atlantic islands, with the heart of their range lying off the Newfoundland coast. The birds’ breeding grounds here lay in close proximity to the rich waters of the Grand Banks. For centuries these cod-rich fishing grounds were exploited by European crews who would race across the Atlantic each spring to have the right to fish at the best locations. This fishery was so productive that it was described in The American Gazetteer in 1762 as “a mine of greater value than any of those in Mexico or Peru.”

It was the auks’ misfortune that they bred in the vicinity of this extractive free-for-all. Once ‘discovered’ they were ruthlessly taken advantage of by these fishing crews for bait and for food. European voyages seeking to discover a north-west passage to the Pacific also timed their expeditions to coincide with the auks’ breeding season to supply their ships with food. In both instances, the birds were often killed on vast scales—something that increased even further after the establishment of permanent colonies on Newfoundland by the British and French. It was this large-scale killing that took place on these islands over centuries that was the ultimate driving force behind auk’s extinction (see Gaskell, 2000).

To my mind, van Dooren’s rearticulations of breeding sites as storied places gives these remote rocks a potency that works on multiple levels. Firstly, it means they would have been invested with history and meaning for the auks as a place of intense sociality—where the birds’ deep, monogamous bonds could be annually rekindled, and the eggs containing the next generation could be nurtured into hatching. But then on top of this, these places also became the traumatic sites of their extinction; places where they were killed in appalling numbers—where the bonds between individuals, and between one generation and the next were pulled apart.

For a while I have been interested in the poignancy of eggs as conceptual objects in the context of this extinction. Eggs are lively vessels, symbolic of future life, possibilities and potentials—they act as beginnings. To experiment around these ideas creatively, I began casting replica great auk eggs in plaster, coating them in photographic emulsion, placing them inside pinhole cameras, and exposing them outside in my garden for 26 to 44 days. This period is an estimate of the time they would once have been incubated, with the photographic process recording the passage of time, and the duration of care.

These early tests provided some positive results, and I wanted to try and refine them with further experimentation. At some point in the future I’d imagined I might produce an installation of hundreds of these eggs, which would be exposed at one of the auks’ old breeding sites during their nesting season. However, working at this scale in such remote places would require a fine-tuning of both material and method—hence the application to an off-grid skills development residency in a yak-felt-lined Mongolian yurt with no electricity in the depths of a violently stormy November. 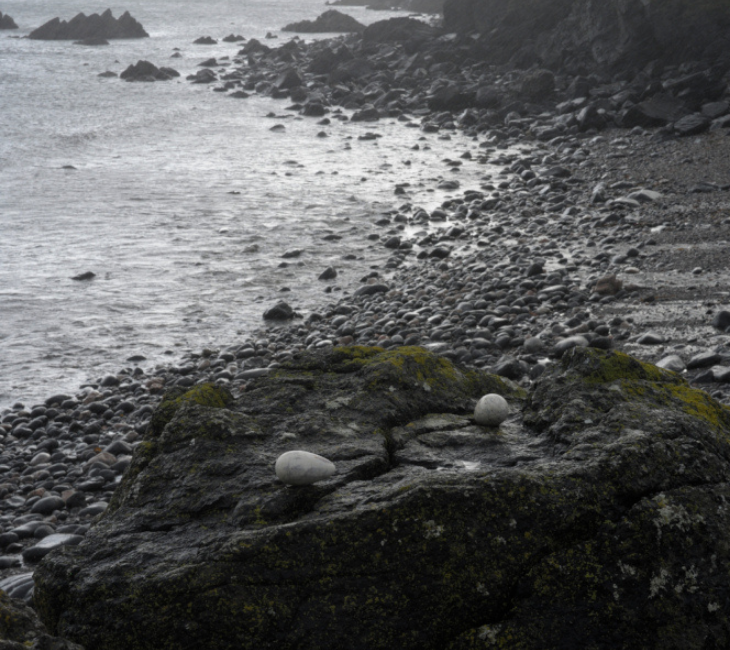 Here I was keen to do several things. Firstly, I wanted  to develop strategies for producing these photographic objects in off-grid conditions, and to assess the feasibility of doing so. Would just being outside at night (away from light pollution) provide an adequate ‘dark-room’ for working with photosensitive material? Following on from this, I also wanted to experiment with non-toxic alternative photographic chemistry in the production of the eggs, including cyanotype processes, coffee-based “Caffenol” photographic developer, soda-ash bleaching and the use of various teas for toning. If in the future I have the opportunity to make this work in one of the ecologically sensitive locations I have in mind, I want to make sure that the impact of doing so is minimal. Finally, on a much more general note, I also wanted to set aside some dedicated time to concentrate on experimenting and testing these new ways of working. As an artist, I know that creative explorations of processes and techniques are key to the production of high-quality work, yet the time available for such trialing during a PhD is severely limited, even within the slightly roomier context of practice-led research. A balance of creative and academic work is hard to maintain, with the former usually quickly giving way to the pressures of the latter.

Prior to embarking on the residency I produced eighteen eggs to expose over its duration. Routines quickly slipped into place. Waking early, I would light a fire in the small log burner to warm the yurt before slipping out into the pre-dawn darkness with a clutch of eggs and paint-can pin-hole cameras to set up the day’s tests. The eggs were placed in the cameras, with the pin-holes generally positioned facing directly up into the sky in various locations. Early on I decided I was not really interested in traditional photographic representation here—that I didn’t want a recognisable image to appear on the eggs. Rather, the photographic element was there simply to record duration. Pointing the ‘cameras’ straight up towards the heavens became the easiest way of doing this. On several occasions I also tried leaving cyanotype-coated eggs outside the tins to expose. Often these were rained on, impacting their subsequent exposure (water acts as ‘fix’ in cyanotype process). Over the course of the day I returned to each camera several times to check on them, and to turn the eggs to ensure an even exposure—a process which I began to refer as parenting. 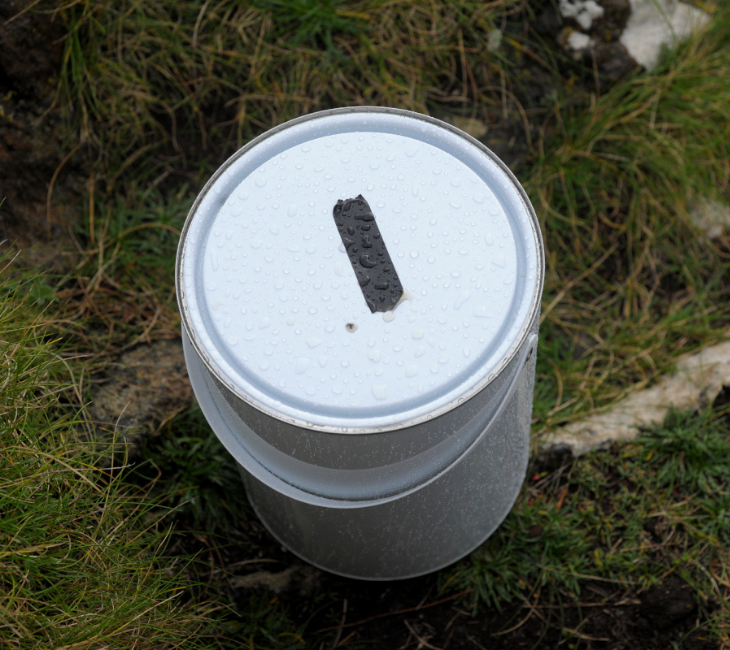 One of my pinhole cameras.

After night had fallen I would return to collect the tins for processing before the moon rose. This was a truly experimental darkroom practice; an abandoning of much of the traditional rigour I have learnt over years of photographic work. Safelights were forsaken in favour of allowing the eye to adjust to the faint light from the night sky. Timings were counted out loud rather than kept rigidly using a stopwatch. The chemistry smelt suspiciously like my breakfast drink of choice.

Whilst development was under way I looked up at the Milky Way to search for shooting stars,  and thought about the inevitability of all extinctions in the context of thermodynamics. According to Erwin Schrödinger, living beings are “stream[s] of order” (2012, p.77) that, in a localised reversal of the second law, draw on the energy emitted by the Sun to briefly persist. Here the endurance of species can only ever be a temporary evasion of the Universe’s tendency towards increasing entropy. When the Sun dies, the localised anomaly that is Earthly life will inevitably end (see Margulis and Sagan, 1995). To be born (or to germinate or hatch) into such a flow is to be involved in ethical time. It is to be indebted to those who came before, to those generations who made the complex conditions for current life possible through long histories of multispecies relation. It is also to be at once reliant upon, and to  have a responsibility to others in the ecological present—to those one is entangled with. Finally, it is to have an obligation to the future, firstly through the ‘gift’ of continuance that occurs through reproduction, and secondly through the perpetuation of a multispecies lifeworld capable of supporting the vast, enduring, ecological weave of interacting species that is life (Rose, 2012). 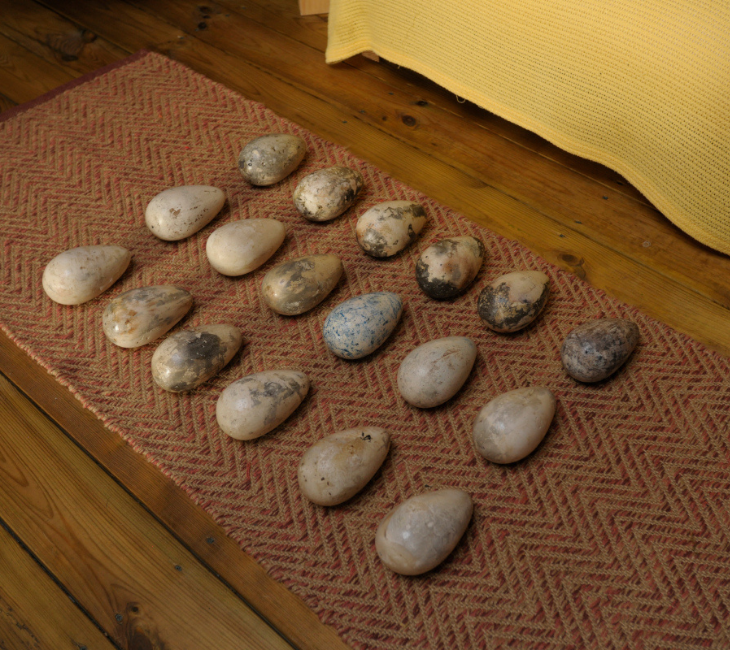 The results of my residency.

The extractive violence at play in the auks’ extinction acts to break this ethical time. However, rather than making a false contrast between natural and human-caused losses to describe the nature of these extinctions, I have started to turn to a phrase coined by Alfred Newton, a Victorian naturalist. He wrote of the wanton destruction of species by humans as an ‘exterminating process.’ I have found such a framing usefully recognises that the great dyings of the present in which both species and populations are slipping away in a tide of anthropogenic pressures is being caused knowingly, and thus requires a different critical, ethical, and political response.

My thinking around these creative processes so far is that these eggs offer the means to do that. They provide vessels to make histories of violence and exterminating process visible. But they also have the potential to hatch new forms of relation—that acknowledge such pasts, but seek for some form of repair.

Thanks to Dr. Jackie Calderwood for her support throughout the residency, and for hosting it.  I also want to say thank you to the SWW DTP for providing the extra funding that allowed for my attendance.

SCHRÖDINGER, E. 2012. What is Life?: With Mind and Matter and Autobiographical Sketches, Cambridge, Cambridge University Press.