Skulls and Teeth in Vienna – Felix Sadebeck shares his recent field trip experience with us. 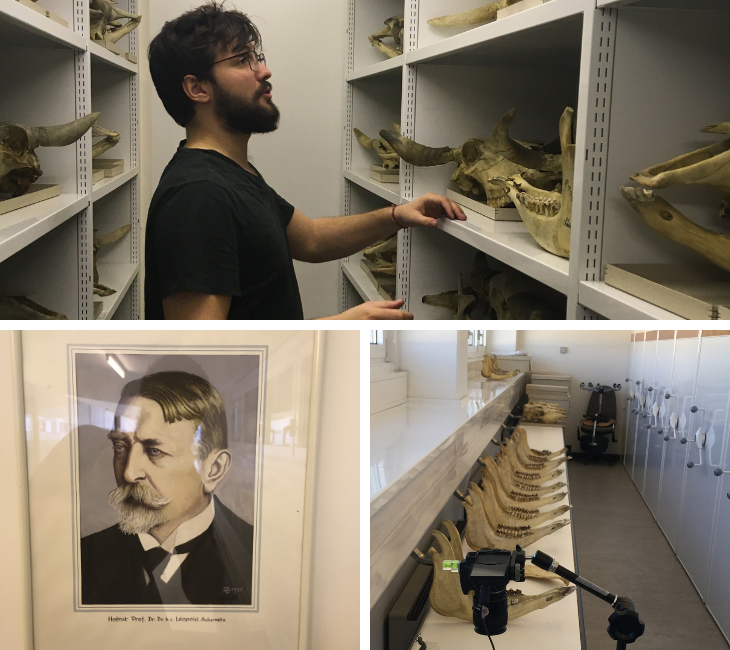 Skulls and Teeth in Vienna

SWWDTP student Felix Sadebeck (University of Exeter and University of Bristol) talks about his recent field trip to the Natural History Museum in Vienna.

The fieldtrip to visit the Adametz Collection in Vienna’s renowned Natural History Museum yielded the so far most important chunk of data necessary for achieving the first big milestone in my PhD. The Collection boasts more than 600 cattle skulls of old rural breeds from across Europe, of which several are nowadays extinct. I was able to record more than 170 relevant specimens for my methodological development – an exceptionally high proportion compared to other such collections (although there are only a few worldwide). 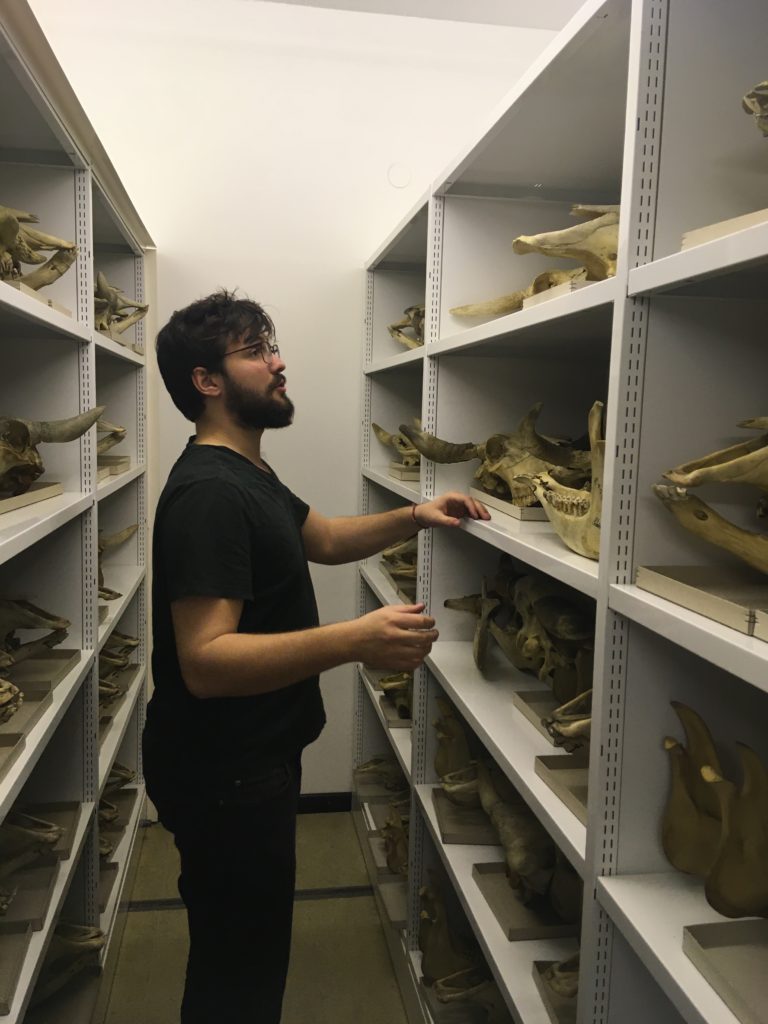 Image: The excited author discovers yet another already extinct cattle breed in the collection – the “Welser Bergschecken”.

The Collection was created by Leopold Adametz in the early 20th century – a period during which many universities, and indeed regal courts, began to pursue a scientific approach to livestock husbandry. In this context, researchers across Europe have analysed cattle skulls of different breeds and regions in an effort to understand the emergence and distribution of cattle breeds as well as the reason for their sometimes quite specialised adaptation to different environments.

This interest, however, dwindled during the ongoing 20th century and most of these collections have been discarded – after all, 600 cattle skulls do need a lot of space. During the 60s, even the Adametz Collection was on the brink of being thrown out: Lucky for me, they found a snug room in Vienna’s ample Natural History Museum building instead! 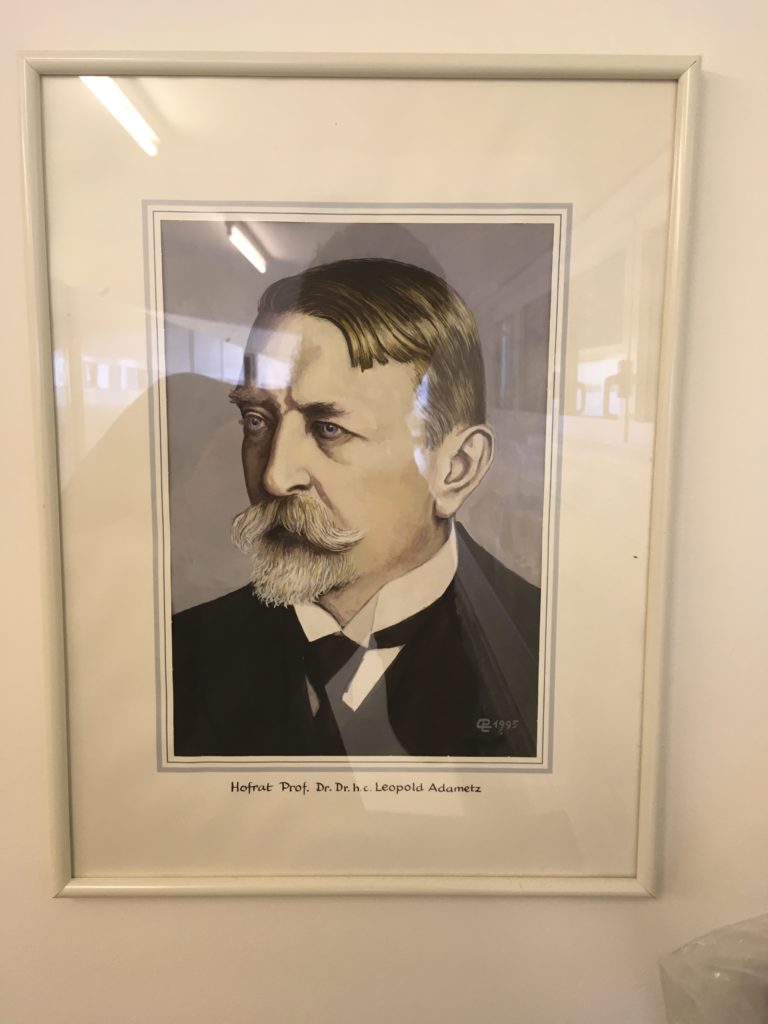 It is a vital part of my PhD project “Conquest by Cattle”, which investigates the peculiarities of cattle husbandry in Roman Britain, to develop a method that allows to distinguish different cattle breeds in the archaeological material. This method is based on two-dimensional Geometric Morphometrics and basically works through photographing cattle check teeth, digitally landmarking them, and analysing the shape difference between each specimen through these landmarks.

To verify that the method actually works, it is necessary to record statistically significant numbers of cattle cheek teeth from animals with known breed. This is harder than it sounds, as most collections nowadays have only a small number of modern cattle – often simply labelled as “Bos Taurus Taurus, modern”. And it is difficult to access the teeth through farmers as well, as they rarely have specific old breeds, especially in the right age – animals whose cheek teeth can be considered for this method must be at least three years old. And this is were the Adametz collection enters the stage! 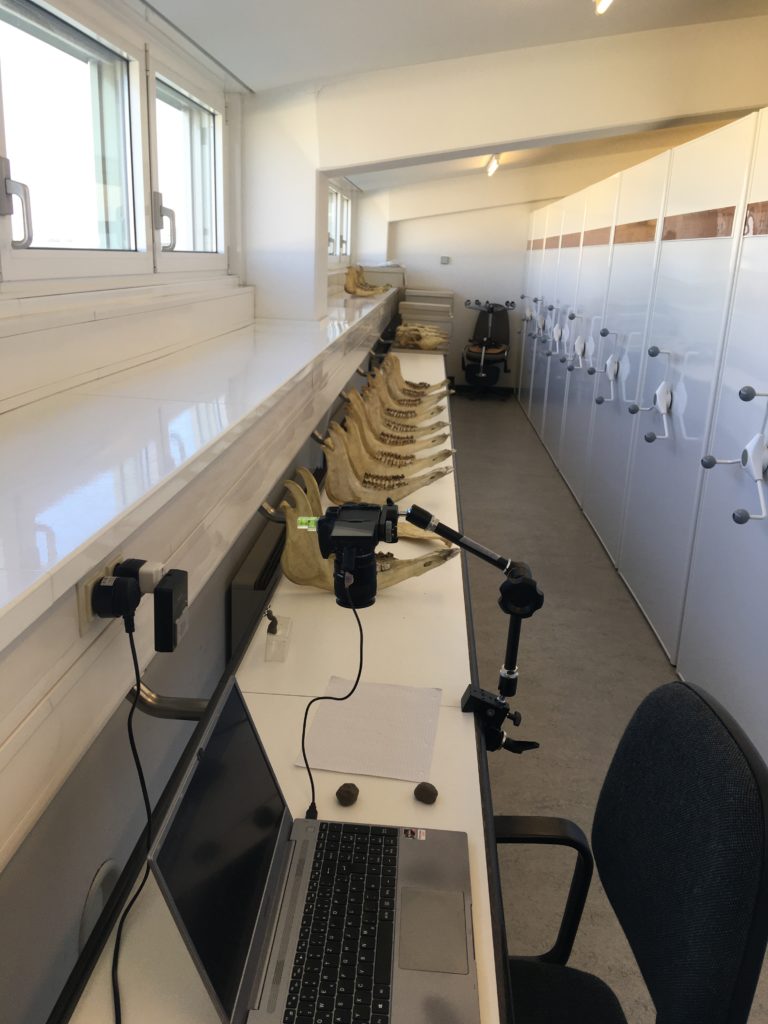 Image: Another eight cattle mandibles lined up for the photographing process. It is especially tricky to photograph the same tooth on every mandible in the exact same angle and position: The method requires a maximum of care in taking the photos and a minimum of disturbances – otherwise, it wouldn’t be possible to capture the subtle shape differences.

It will take a while until all the landmarking and analysis is done. Until then, I can’t tell if my method will work. But what I can say is that this collection delivered the data necessary t verify or falsify my approach. And whoever thinks that all cattle look more or less the same: Make a trip to Vienna and have a look at the fantastic Adametz Collection – no two cattle look the same!

My special thanks goes, apart from the SWWDTP who generously funded this field trip, to the Natural History Museum in Vienna and their fantastic team! A warm welcome with cake and coffee was as much part of my visit there as were the fascinating chats about Roman cattle morphologies with Konstantina Saliari and Erich Pucher, who have been in charge of the Adametz Collection (and much, much more) for the last years. No one could ask for any better experience in doing a data collection field trip!