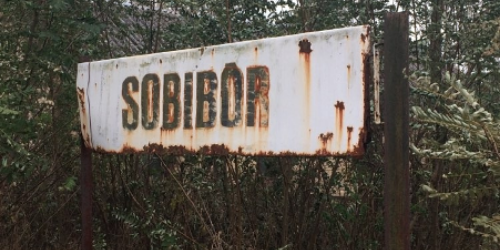 Sobibór on the Screen is an exhibition that gives a background understanding to the history and memory of the former Nazi death camp Sobibór in Eastern Poland. It also explores the narrative and impact of selected films that represented a significant prisoner revolt.

We had been talking about developing an exhibition like this for over a year after we realised we had some overlap in our research interests, and we wanted to explore this somehow beyond academic writing. Hannah’s PhD explores the public and private memory of Sobibór via artefacts and material remains, and Issy’s thesis focuses on the representation of Holocaust memory in the Russian Federation, which also is a fundamental aspect of Sobibór’s history, particularly following the release of the film in 2018.

We concluded that for many, awareness of Sobibór, its victims and the story of the uprising has been accessed via cinematic representations, and that this was something worth investigating. After we received funding, we agreed that the primary aim of our exhibition, then, should be to outline the significance of these and how they were received or framed within the socio-political time of their production and release. We looked at both positive attributes and critiques, and reflected on our own understanding and perception of these films, which we hope will allow for further thought and discussion for our visitors.

We both really enjoyed developing the skills of communicating our research to a non-academic audience – it encouraged us to think about our work in different ways. We have also both developed curatorial skills which we hope we will be able to develop further in our future careers.

We have continued to add to the exhibition page since its launch – we upload blog posts every month which have even included interviews with original cast members. Issy will be writing about the experience of curating this exhibition in the epilogue of her PhD. We have already used the exhibition as a springboard for other joint projects together and hope to continue to collaborate in the future.