A NIght in the Life of a Dubstep DJ: An Unexpected Ethnography (Part 2) 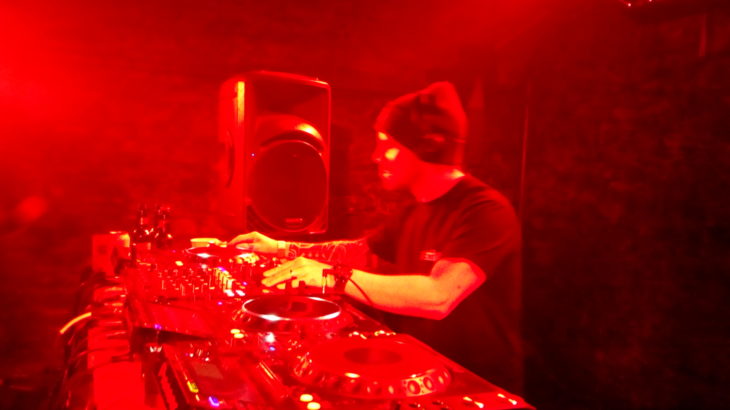 Marko Higgins, Year 3 PhD, University of Bristol and University of Southampton writes his 2nd installment on his placement with Artikal Music UK.

In the previous post I introduced my unexpected ethnography, “a night in the life of a dubstep DJ”. This came about as the result of a very last minute gig booking for label manager and dubstep DJ, J:Kenzo, who hosted me during a research trip with Artikal Music UK (a non-HEI partner for my SWWDTP funded PhD project). The night in question was an event held at Club Loco in Bristol, and the previous post took us from a slightly last minute dash to the airport in Belfast up to the point at which my host took to the decks.

So this brings us to the important bit — the centrepiece of this research trip — which is J:Kenzo’s DJ performance. This proved to be an extremely luminescent primary source for my project, and just like this mini-ethnography itself, somewhat unexpected. As I stated at the outset of part 1, my host is well established as a dubstep artist: in 2011 he had two releases on the highly exclusive and genre defining label, Tempa — The Roteks and Ruffhouse — which essentially certified him as a de facto member of the dubstep premier league. This was cemented a couple of years later with a residency on Rinse FM, a radio station managed in partnership with Tempa and the club night FWD>> (mentioned in the previous post). These three institutions effectively formed dubstep’s “cradle of civilisation” in the early-2000s.

I wanted to elaborate on this point as, on this occasion, strictly speaking, not a great deal of my host’s set was dubstep. The performance began with some UK garage (some of which he had been playing to me in the studio a couple of days before) before segueing into dubstep’s familiar enveloping bass and rhythmic lurch. This was the musical foundation of the next twenty-five minutes or so, with undulating energy levels, assisted by several “quotations” from other musical styles such as US house and acid techno. I also noted some Artikal material, as well as some of Jay’s own work, being showcased. Around about thirty minutes into the set the pace of the music quickened with some urgent and arresting breakbeat (another closely linked form of music) before shifting into top gear for the second half of the set, which consisted entirely of uptempo drum & bass.

Why is this important ? Well, my research project is concerned with developing a more meaningful understanding of musico-cultural trends by looking at them ecologically. What J:Kenzo did in his performance was demonstrate dubstep’s place in a contemporary musical ecosystem, reuniting the style with its “extended family”. Dubstep in the UK, as a subcultural movement, is best understood through the interwoven narratives of proximal musical movements such as UK garage, grime and drum & bass, and this is reflected in the way it shares much of its musical DNA with these styles. As a musicologist, to explain why dubstep sounds (or perhaps “behaves”) the way it does, I must explore its web of inheritance, which can’t be untangled from these adjacent musics. I have mentioned the MC, for example. Well, the MC is also strongly associated with many of dubstep’s musical siblings and cousins. The MC can therefore be seen in symbolic terms, standing in for all the shared traditions of an entire family of musical cultures. Long story short, by demonstrating over the course of their set how dubstep is knitted into a busy, and somewhat noisy, ecosystem of other musical styles and subcultures, J:Kenzo and SP:MC basically managed to write the first chapter of my thesis in sound and vision. It’s just a shame this isn’t a recognised, submittable format — could’ve saved me a heap of work ! 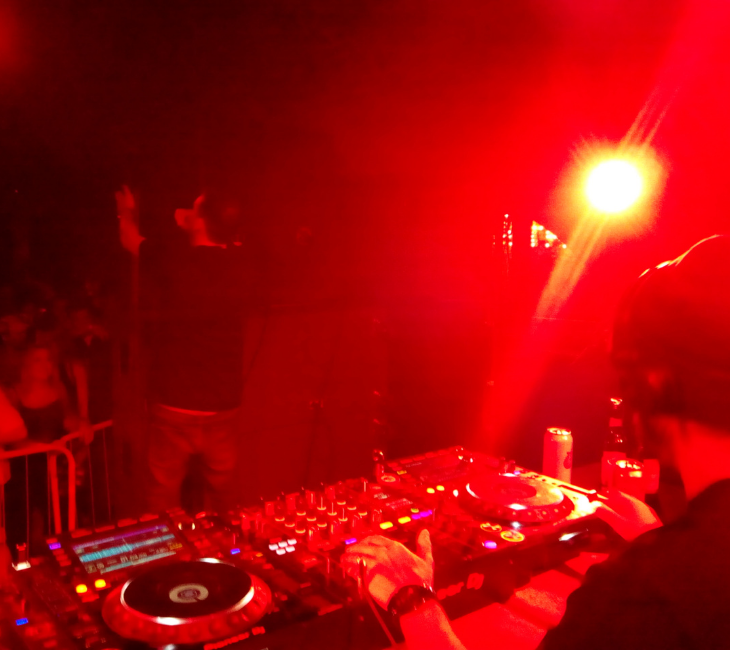 Mid performance. Notice the “holy trinity” of DJ, MC and sound system, laid out foreground to background in this image.

When I recognised that something really significant to my work was taking place, my note taking moved from a general description of the set’s trajectory into a detailed blow-by-blow, with a short description of every track. “What you writing, mate ?” I was asked on numerous occasions, discovering later that word was going around backstage that I was a PRS (Performing Right Society) representative and was there to collect data on the music being played. I mean, this is partly true I suppose !

Among those who asked what I was up to was SP:MC. Perfect ! I’d been hoping to get an interview with him, and bellowed my intention in his ear, which was affirmed with a fist bump. After my host stepped down from the decks we poured a couple of celebratory rum and gingers and I settled down to get my paperwork together for interviewing SP while Jay headed out into the crowd to find a good spot to listen to the act that followed him. This is another important takeaway from my experience: seeing up close just how loyal and passionate this community is for their collective musicking activities. We could have packed up and headed back to the grubby AirBnb to get at least some rest, but my host wanted to hang back and see what his fellow artists were playing, as well as to show solidarity and support.

The extra window of time was favourable to me too — as soon as SP:MC came off stage I pretty much jumped on his back like a cowboy doing a rodeo. I’ve missed out on a couple of important interviews so far in this project by not being a bit more aggressive in my approach, so I’m no longer afraid to basically get an artist in a headlock if that’s what’s required. Fortunately, SP was very congenial, happy to participate, and even fended off a few drunken selfie seekers on my behalf who would have otherwise interrupted our interview. With the recording happily in the bag, I scribbled some more notes and then headed out to the main arena to find my host. There, I ended up in conversation with a local soundsystem operator who throughout the summer I’d been hoping to add to my list of interviewees. He asked me what I’d been writing and seemed very interested in my project, expressing a personal interest in academia. We exchanged numbers — another win ! My host and I then returned backstage to gather up our stuff. There I exchanged numbers with another well-respected Bristol based artist who gave me a succession of enthusiastic fist bumps for doing this project, each served up with an ear-to-ear grin (“this is exactly the kind of recognition this scene deserves, it could literally transform people’s careers !”). By this point it wasn’t far off 3AM, closing time.

After leaving the venue we stood at the corner of Temple Meads waiting for an Uber, and I whisked my recorder out again to ask my host his feelings about the night and the set. Jay talked about the intensity of the sound, stating that he felt it was a bit “too much”, sapping the music of some of its clarity, but he’d also noticed that some of the stuff being played by the artist who followed him sounded “really good”, and that he’s still working towards creating music that translates well in any acoustic environment. This was interesting to hear, as it demonstrates that even an artist as well-established as J:Kenzo (he has, for example, recently fulfilled a commission for the drum & bass superstar, media personality, Bond villain and Eastenders veteran, Goldie) is still driven to further refine his craft and finesse his skills.

Back at the AirBnB we chilled as best we could for an hour or so (big up the City Road door slammers and screaming party-goers) before taking another Uber to get back to the airport for 5AM. We were both shattered by this point, but still making some light conversation. My host spoke to me about his difficult, sometimes terrible, experiences with accommodation, noisy and uncomfortable hotels being a frequent problem. Lack of sleep seems to be an occupational hazard in this profession. As it turned out, this proved something of a premonition when it came to my own experience at the end of the night !

We picked up some snacks at the airport, uninspired. Just placeholder food really. I grabbed a hot chocolate with almond milk, reasoning that a sugar crash would probably be just the ticket for me when I got back to my hotel. Our plane lifted off at 7AM, pretty much twelve hours to the minute since we landed in Bristol the night before. During the flight, I ran my recorder with no real objective and we talked a bit about sound systems and soundsystem culture in the USA. We were flagging by this point though, and the conversation soon ran dry.

We landed in Belfast just before 8AM. My host had to drive back home from the airport on no sleep which, in spite of being far from ideal, is apparently not at all unusual. I took a bus back into the city centre and arrived at the hotel just before 9AM, making an immediate point of getting some slightly better food in me. Jay’s earlier premonition then came into play: I tried to get some sleep through the morning, but was kept awake by the sound of cleaners, people checking in and out and, above all, the interior studwork of my cheap, cardboard hotel shuddering every time someone on the floor used a door. By afternoon I gave up hope, got showered and ventured out to try and make something of my downtime — exploring an unfamiliar city on zero sleep. This is exactly the same pattern that my host had described to me during our conversations the night before, so was effectively the final piece of this ethnographic study: experiencing the lifestyle of a working dubstep DJ on tour, in full, for twenty-four hours. Personally, I’m not sure how I’d get on with three or four solid weeks of it ! 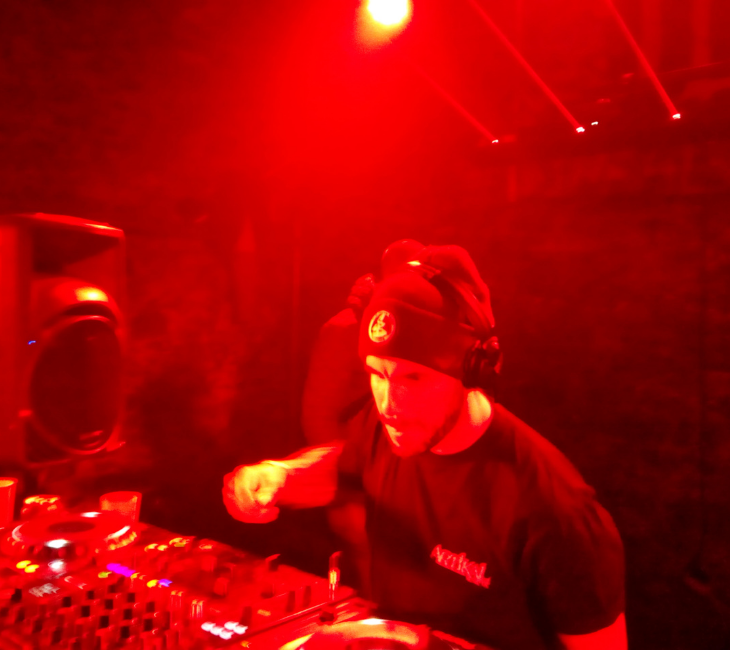 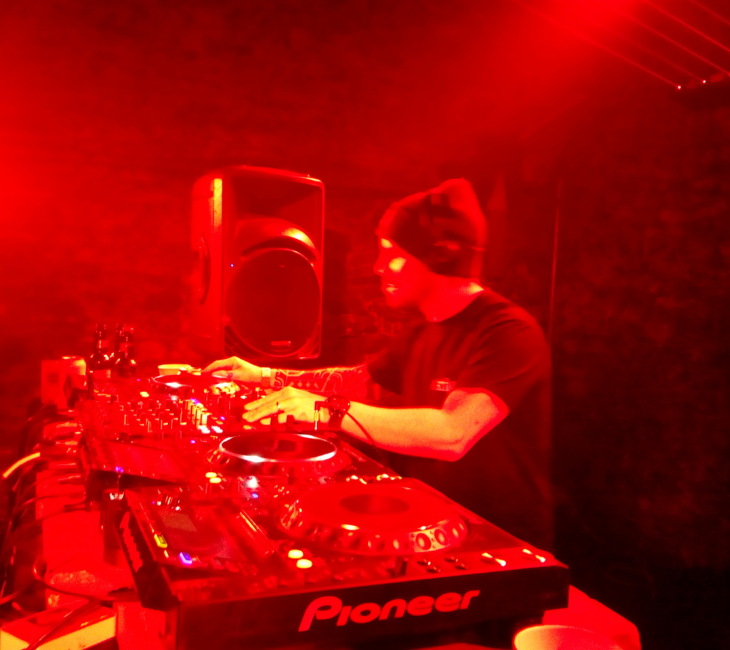